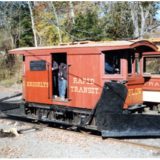 Snow plow #10 was built by the Taunton Ma. Locomotive Works in 1899 for the Nassau Electric Railroad, a subsidiary of the Brooklyn Rapid Transit. It is a shear plow which moved the snow to one side of the track and was most commonly used on double track lines. When New York City Transit Authority retired the last Brooklyn cars in 1956, this plow was still in service.