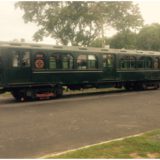 Car 503 was built in 1928 by the American Car and Foundry. The Hudson and Manhattan operated cars under the Hudson River from Lower & Mid-Town Manhattan to New Jersey. The cars in the 503 series where built from 1908 to the late 1920’s. Do to the close quarters and the fact the car operated under land and water, fire was a major concern of the public. The cars where promoted as being all steel and in fact the first fleet to be built this way. Another unusual feature of the cars is the new center door configuration. Due to the H&M financial problems these cars operated well into the 1960’s. This car operated as an H&M car from 1928 to 1962 then Port Authority Trans Hudson (PATH) from 1962 to until 1965. It operated in work train service until 1979, coming to BERA in 1979.