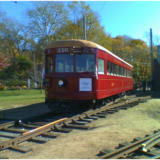 Cincinnati & Lake Eric Car 116 was one of four left, built for the C&LE which intended to modernize the system. These new cars had revolutionary features like automotive-inspired styling, aluminum sides, and magnetic track brakes. Declining ridership led the C&LE to abandon all passenger service in 1938, however, at which time six coaches – including 116 – were sold to the CR&IC, or “Crandic.” These six cars ran on the Crandic until that line was abandoned in 1953, when four of them were sold off intact. Car 116 was bought by BERA and moved to Connecticut. In the 1970’s restoration work was begun to return the car to its appearance on the C&LE however this work was not completed. Today restoration efforts have been restarted with the exterior of the car painted and the interior mostly complete.